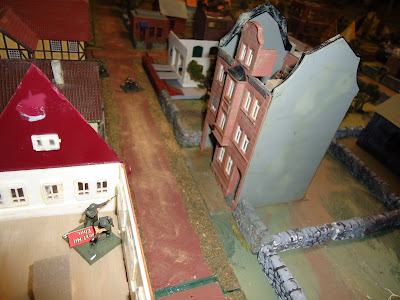 After finishing the assignment from hell I now have some life back, and found an hour or so to mess around with the city fighting rules a bit more. This shows a German platoon firing at a French one. The French are on a higher level, so the -1 to hit for firing uphill applies to the Germans. At this stage of the test, units on level one could see and engage targets out to five inches, and units on level two, out to ten inches or 500 yards. 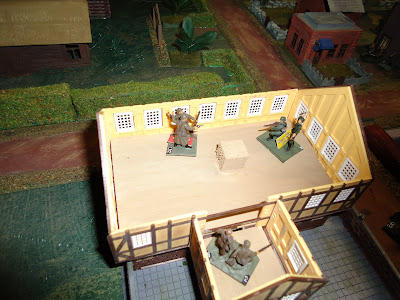 This is about as close as house to house fighting gets in CD, unless it is an actual close assault situation. If we followed the rules exactly here, then the bottom unit would not be able to see the Germans, however, our house rule of five inches means that more units can be involved because they can see further. There was fighting on the ground floor of this building going on at the same time, also. 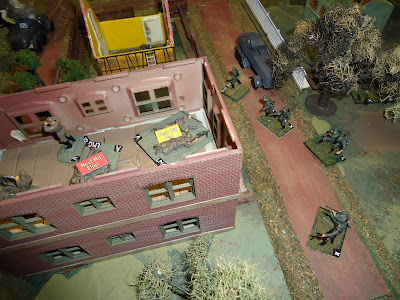 This is the hotel garrison. They had remained unmoved and unaffected by other units breaking around them mostly because they could not see any. By the time all of the German units in this area were spotted, the French found themselves cut off from their nearest friendlies by almost 1000 yards. The play testing has been very useful for trying out common sense house rules for application in games. Next, I plan to try a hilltop garrison scenario, that includes similar conditions to that of cities, such as possible broken line of sight or difficult ground.
Posted by Al at 3:21:00 PM

Email ThisBlogThis!Share to TwitterShare to FacebookShare to Pinterest
Labels: Scenery