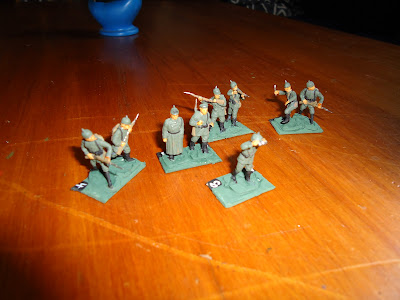 More or less finished these guys, just a bit of touching up to go. Between an old Airfix set and a new HaT one I managed to make a full regiment of three battalions. Here are a couple of companies. The Airfix figures had a lot of flash on them but still look okay; I also included a few Emhar figures for just a little more variety. The HaT figures are very good, although still in that wretched soft plastic, however. 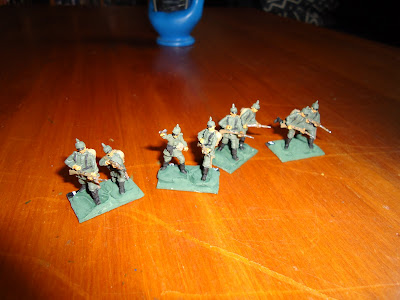 I have been slowly building up data to do some 1914-15 games later in the year, either Neuve Chapelle or Loos, possibly both, and hope that if I put it off long enough, HaT will release their WW1 BEF, which I am greatly antiscipating. If they don't release them in time I'll probably have to get some more of the Airfix BEF set, which is less than desirable, as I already have a regiment of these. In the meantime I've started working with Paul on doing some early war WW2 stuff, starting with Calais.
Posted by Al at 4:29:00 PM