This is a trial layout for a Commando raid game. The actual event took place in December 1941, in Norway. This village had a power station and several fish oil storage tanks which were the focus of the raid. The maps I have to work off aren't too bad but a couple of important features are proving hard to place, so I may yet have to make or acquire these before setting it up again properly. 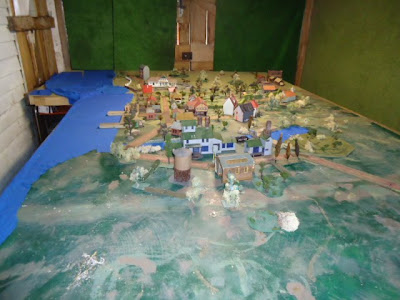 Because of the small numbers involved all units will begin the game on cards which will be moved on the board until it is spotted, then replaced by its miniature. This is because each player gets a few dummy cards to move as well. There needs to be special rules to restrict the movement of German reinforcements until the raiders have been spotted, air cover, AFVs, etc. Historical games benefit from accurate map to table translations, so I have made a number of notes and the next layout should theoretically be much better.
Posted by Al at 7:10:00 PM